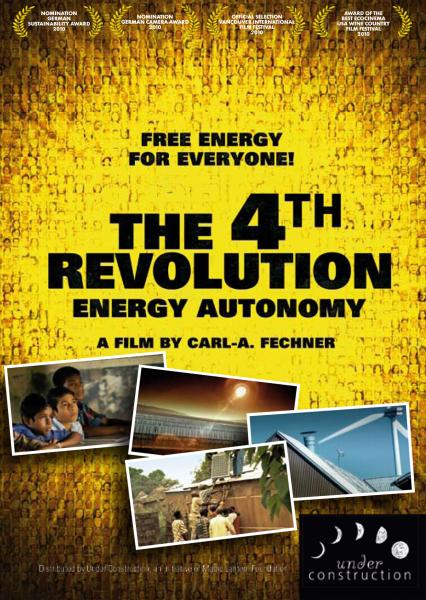 This painstakingly produced documentary film calls for an energy shift away from fossil and nuclear fuels to renewables. The captivating vision is for a global community whose energy supply is 100 percent provided by renewable sources – available for everyone, affordable and clean. A global restructuring can begin, resetting the balance of power and more fairly distributing capital. As it journeys around the world, the film observes the life and work of ten individuals who are united by one goal: Energy Autonomy.

Director Carl-A. Fechner and his team travel with prominent individuals and speak with leading managers, mothers in Africa, bankers and ambitious activists around the globe. Solutions emerge as the film unveils impressive photos and clear statements; it causes the viewer to think further and act and has already become more than just a film. It’s a movement.

Germany’s most successful cinema documentary of the year 2010!

„The 4th Revolution – Energy Autonomy is both spectacular cinema and a meaningful message.“ SWR

Director Carl-A. Fechner about setting the 4th Revolution in motion:
„I am totally convinced: There has never been such a powerful movement as at the present. Energy Autonomy: That is a goal that can unite billions of people beyond national borders and intellectual barriers. Simply because global energy autonomy means more justice, less war and overcoming poverty. It is a huge issue for a large cinema production, which can and ought to be accompanied by a wide range of events, initiatives, discussions, and interactions.“

Do your part to spread the message! Make energy transition happen!